Can Probiotics Boost Your Immune System? 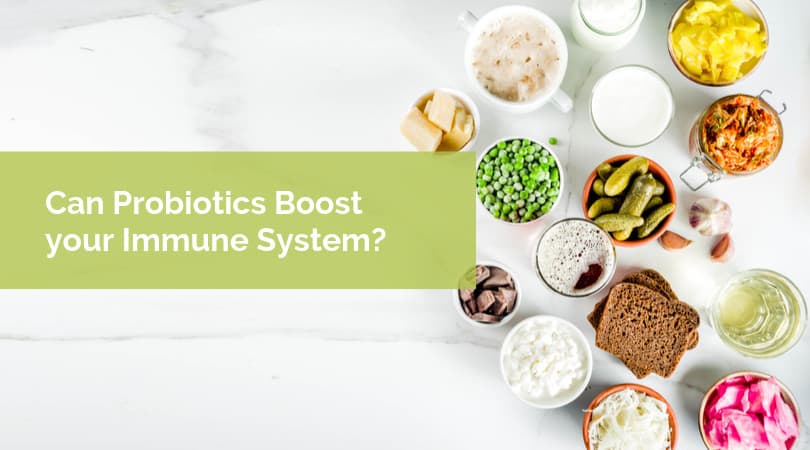 Fun fact: Did you know that there are about the same number of bacterial cells as human cells in your body? That means that there are a whole lot of bacteria living inside of you RIGHT NOW! You are half bacteria! This fact is actually quite amazing and extremely beneficial.

The good news is that most of these bacteria are necessary and even essential for optimal health. These helpful bugs are needed to digest your food, extract important nutrients, protect your body from other pathogens and also keep things running smoothly with your digestion. One important role they play is keeping you healthy by communicating regularly with your immune system.

In order to stay in tip top health, you need to also keep these little guys healthy. One way to do this is to be sure you have the right number of beneficial bacteria living in your gut. When the good guys are around, they help your immune system function at its best. Certain types of bacteria taken in supplement form or found in foods such as fermented products and some dairy are called probiotics. There are many health benefits of probiotics, but one in particular is the connection between probiotics and the immune system.

What Are the Benefits of Taking Probiotics?

It’s estimated that there are roughly 10 trillion microorganisms living on the human body, with the majority of them being found in the gut. These bacteria are essential for digestion, helping to break down the food you eat and making it possible for your body to absorb nutrients into the bloodstream. Without the bacteria living in your gut, you would have a significantly impaired digestive system.

However, bacteria don’t just break down your food. They have many other functions in the body. Here are a few other benefits of taking probiotics to help maintain the right gut bacterial balance:

These little microbes truly are our partners in health. Isn’t it interesting that while some microbes can keep us healthy, others make us sick?

Probiotics are important for the function of your immune system. A 2014 study evaluated the impact of probiotic supplements for the immune system in athletes. Athletes are prone to respiratory infections because of the physical stress they experience with intense exercise. Results from this study found that those who took a supplement, versus a placebo, had 40% fewer colds and digestive illnesses. For those who did get sick while taking the supplement, the illness appeared to last about 2 days less than the placebo group.

A 2017 study found that just the presence of healthy gut bacteria can lower the risk of developing an antibiotic-resistant dangerous superbug, called Clostridium difficile, by 60%.

How do probiotics help the immune system? Probiotics work to help reduce illness by increasing the production of antibodies and other disease-fighting cells in the body. This helps the immune system swiftly fight off any viruses or bacteria it may come into contact with.

Probiotics and Gut Health For Immunity

Your digestive and immune systems may seem completely separate, but they actually work hand in hand to keep you healthy. Gut bacteria play a critical role in helping regulate and activate immune cells.

First, they inhibit the adherence of pathogenic bacteria to the intestinal wall, so the bad bugs are not allowed to take over your gut and make you sick. The good bacteria help maintain the right balance of microorganisms in the gut. An imbalance of bacteria in the gut has been associated with a variety of illnesses from allergies to obesity.

Gut bacteria can help regulate immune response directly, by controlling inflammation and sending signals to the immune system telling it how to react to possible threats. Probiotics and the immune system are partners in the quest to keep you healthy.

The best way to support your immune system is to eat probiotic-containing foods as often as possible. Probiotics from food or supplements are the same or very similar to the bugs naturally found in your gut. Taking probiotics can bring this bacteria into your colon, helping to restore the correct balance of helpful bugs.

A few foods that are high in probiotics include:

Aim to include a variety of these foods in your diet to help load your gut with healthy microbes that will keep your immune system healthy.

Choosing a Probiotic for Immunity

If you choose to take a supplement to boost your probiotic intake, the most beneficial probiotic bacteria falls into a few main genera: Lactobacillus, Bifidobacteria, and Saccharomyces. Each of these genera contains many species. In fact, of the 500 species of bacteria identified that inhabit our colons, Lactobacillus acidophilus and Bifidobacterium bifidum are two of the most common.

The best probiotic supplements for the immune system will contain a variety of different strains. Research is still evaluating which strains are optimal for specific health concerns, which is why a product with a large variety of species is recommended.

The other factor to consider when choosing a probiotic for immunity is to look for products that have a high number of colony-forming units (CFU). Look for a product with at least 1 billion CFU, but 10-20 billion is probably ideal.

Also consider varying your supplement from time to time. If you are always taking the same probiotic product with the same exact types of bacteria in it, you are not providing a lot of variety to your gut. Therefore, you should switch up your brand and/or strain of probiotics to get the best result.

You probably don’t need to take a probiotic supplement all the time, unless you suffer from digestive concerns and it helps improve your symptoms. During cold and flu season or after you finish a round of antibiotics, it is probably a good idea to take a probiotic for a few weeks or months. Otherwise a focus on eating foods high in probiotics provides more than enough variety of microbes to keep the gut healthy.

Probiotics and Your Immune System

It doesn’t matter if you eat foods high in probiotics or take a supplement, both will help to flood your body with more healthy bacteria, reinforcing the bacteria already in your body. The more bacteria there are in your intestines, the easier it will be for your body to fight disease and stop infections from spreading. Not to mention protect the lining in your intestines and increase your ability to absorb nutrients — what’s not to love?

With all the many health benefits of probiotics, the most impressive is how they can give you an immunity boost in a way no other supplement can. They essentially work from the inside out to protect your body, leading to a stronger immune system that is better able to defend itself against all illnesses that come your way.

Jaime Rangel, RD
Jaime Rangel, RD is a Registered Dietitian who practices as a Clinical RD for a U.S. News & World Report ranked “Best Hospitals”, Scripps Health. He also lends his nutrition expertise to companies in the Corporate Wellness/Private Sector such as IncentaHEALTH, Well Wisdom, and a number of private clients. His journey began at UC Davis where he earned his degree in Clinical Nutrition all the while competing as an Elite Collegiate Rower and Triathlete. His interest in Nutrition began from the concept of optimal fueling for athletic performance which later evolved towards treating hospitalized patients in critical conditions using the same “optimal fueling” methodology. His passion for nutrition has taken him around the world to research and observe the role of food in the lives of individuals and communities of all backgrounds. Currently, he resides in San Diego, California where he completed his credentialing program at San Diego State WIC DI, continues to grow his nutrition career at Scripps Health, and avidly works to refine his novice level Tennis game on his free time.